An Artful Infusion of Pineapple Rum 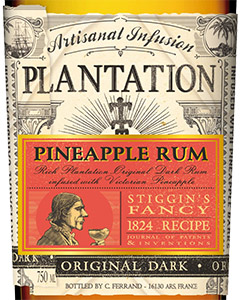 Plantation Rum has released a limited edition of their Stiggin’s Fancy Pineapple Rum, based on a character from a novel by Charles Dickens, aided by research from Cocktail Historian David Wondrich.

As a study in recreating such fanciful classic libations, Alexandre Gabriel, proprietor of Cognac Ferrand, with help from the spirits and cocktail historian David Wondrich, set out to revive this forgotten nectar. The result was a small batch of delightful liquid named Stiggin’s Fancy Pineapple Rum.

Gabriel and Wondrich relied on several ancient recipes to recreate it, and added a few traditional techniques from their own bag of tricks. The 1824 English Journal of Patent and Inventions and the 1844 Journal of Agricultural Society were their main sources of inspiration — along, of course, with Mr. Dickens. They infused ripe Queen Victoria pineapples in rich, aged Plantation Original Dark Rum for three months. Meanwhile, they macerated, also in rum, the bare rind of the fruit (where the pineapple’s essential oil chiefly resides) before distilling it, creating a bright pineapple essence to blend with the lushness of the infused Plantation rum. The result was stunning.

On the nose we experience ripe pineapple and Madagascar vanilla, a good measure of oak followed by green banana, toasted coconut and pineapple hard candy with a mixture of citrus peel and dried fruit. On the palate, a buttery and oaken entry leads to big fruit, dominated by pineapple, then toasted coconut and cherry/almond notes before drying out mid-palate as the well aged Trinidad rum begins to shine through the fade to authentic pineapple.

Although his original intention was to create only 1000 bottles to share with rum fanatics and enthusiasts at the annual Tales Of The Cocktail convention in New Orleans, the overwhelming reaction created a demand that could only be satisfied by a greater production. A second batch was created and may now be available at select retailers in limited quantities.

A tip of the hat to Mr. Dickens and his loquacious character Reverend Stiggins, to cocktail historian Dave Wondrich and most of all — to Alexandre Gabriel and his production team at Plantation Rum for a uniquely delightful expression of rum.