Curious about rum? What is rum? How is rum made? Let’s learn about rum. Our Rum 101 primer is here to help.

First, the rum basics. Rum is a distilled spirit made from the sugar cane plant. 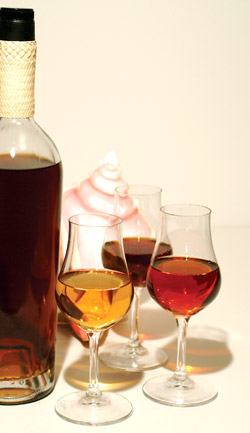 Rum is produced in many styles and variations

Rum is an alcoholic spirit made from sugar cane, or its derivatives. According to the United States Government Federal Standards of Identity, the following paragraph offers an official definition of rum.

(f) Class 6; rum. “Rum” is an alcoholic distillate from the fermented juice of sugar cane, sugar cane syrup, sugar cane molasses, or other sugar cane by-products, produced at less than 190 proof in such manner that the distillate possesses the taste, aroma and characteristics generally attributed to rum, and bottled at not less than 80 proof; and also includes mixtures solely of such distillates.

Significant factors that affect the taste, quality, color and viscosity of rum include:

Most of the rum distilled in the world today is made from molasses, a by-product of the crystalline sugar making process. After all of the crystalline sugar has been removed from the sugar cane juice, the left-over molasses still contains fermentable sugars and can be stored for extended periods of time. Often, the term “Black Strap” is used to refer to a low grade of molasses that has the least amount of sugar remaining in the liquid.

A third type of rum stock is concentrated sugar cane syrup, sometimes referred to Sugar Cane Honey or Sweet Table-Grade Molasses, which still contains all the sugars present in cane juice, with most of the water removed. This concentrated cane syrup may contain more than 90 percent sugar and is able to be stored to be fermented and distilled at a later date.

How Rum Is Made 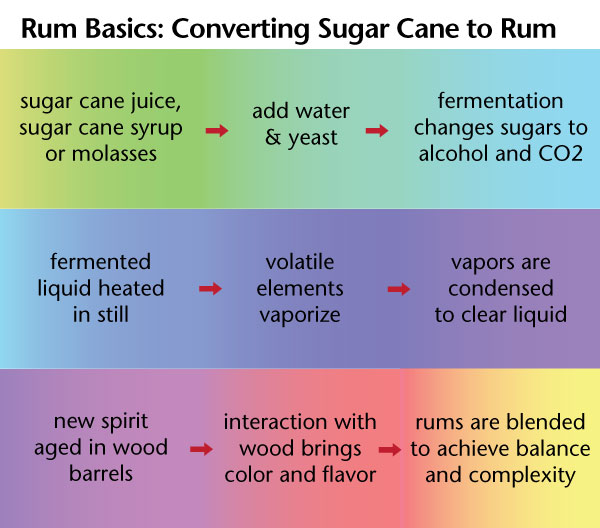 The traditional method of converting sugar cane to rum involves a series of processes from fermentation and distillation, to aging and blending.

When sugar cane juice or other sugar-based liquids are allowed to rest, yeast in the air is attracted to the natural sweetness of the liquid. The process of fermentation occurs as sugars are converted by yeast into alcohols, at approximately the strength of wines. 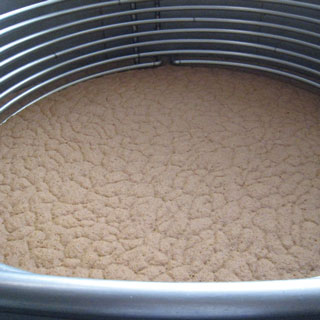 in a typical fermentation of rum, water and yeast are mixed with molasses in large vats to begin the process of converting sugar to alcohol

In a modern distillery, fermentation takes place in large vats where select, often hybridized yeast can interact with the sugars in the liquid for a designated period of time. This can be as short as 24 hours or as long as three weeks, depending on the strain of yeast used and the style of rum being produced.

To further concentrate these alcohols, the process of distillation isolates much of the alcohol components by evaporating and condensing them into a second holding tank.

The resulting distilled liquid contains mostly alcohol, plus some other ingredients that provide unique flavors.

In some cases, additional distillation cycles are used to further purify the alcohol. The more these alcohols are isolated, the fewer flavor components remain in the solution.

In simple terms, the classic centuries-old process of making rum from sugar cane juice is straightforward. When the cane fields are harvested, the stalks of cane are crushed and the juice (or molasses) is fermented to begin the rum process.

Open vats are used to attract yeast from the surrounding environment. Slowly, over time, the yeast converts sugars to alcohols.

The resulting fermented solution is then heated (distilled) one batch at a time to concentrate the percentage of alcohol by separating the components.

Since alcohol evaporates at a lower temperature than water, a careful heated mixture will allow the alcohol to evaporate, while leaving behind water and other heavier elements. 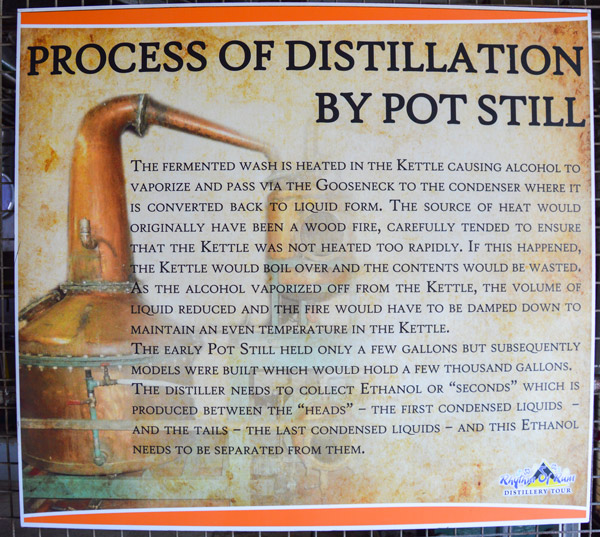 Pot Still Theory – a sign for visitors at the St. Lucia Distillery explains the simple process by which their old pot stills were operated. This distillery still operates three different pot stills.

After separation, the alcohol is rested in wooden barrels to mature. The interaction with wood mellows the liquid and adds color, while creating pleasant aromas and flavors.

Many artisanal rums are produced by small companies in small quantities. Many producers believe that pot stills allow them to produce the most desirable spirit. 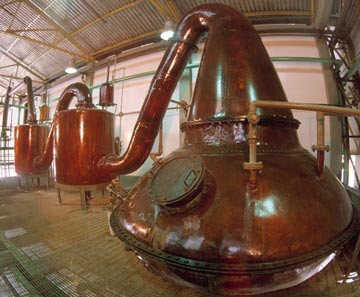 The traditional pot still is a centuries-old method of distilling fermented product in relatively small batches.

The fine art of the distiller is the key to success for the traditional pot still method. The disadvantage is that each distinct batch may vary to some degree and high volume production is not always feasible.

The use of pot stills is not uncommon in some territories that retain traditional methods of production, such as Jamaica, Barbados, Guyana and St. Lucia.

The separation of heads, heart and tails in a batch still is a function of time. The first, lightest vapors to condense are heads (not desirable). Subsequently, the heart of the rum batch (sometimes called seconds) is collected for storage before the final stage (tails) is discarded for other uses.

a Continuous Column Still produces rum by separating the lighter alcohol compounds from the heavier non-volatile compounds in the fermented wash.

Most modern, well known brands of rum are made from molasses distilled in large column stills. The process involves heating the fermented molasses wine (sometimes called beer or wash) in tall columns, while steam in these large pipes strips the alcohol from the fermented wash.

The alcohol rich vapor is collected on condenser plates throughout the column where it exits as a clear, high proof alcohol.

A traditional two-column still, often referred to as a Coffey Still (perfected by Aeneas Coffey) is used by many traditional distilleries. In 1830, Mr. Coffey was granted Patent #5974 for the design of his two-column continuous still, which revolutionized the process of distillation and was rapidly embraced by distillers around the world. He established Aeneas Coffey & Sons in London, a company that remains in operation today under the name John Dore & Co. Limited.

Some of the most modern refineries use massive five-column stills that further refine the process and produce a more consistent, nearly pure alcohol product. Generally speaking, the rums produced in these five column stills are lighter in body and contain higher percentages of alcohol, up to 96% abv.

In a continuous column still, the separation of heads, hearts and tails is not a function of time as with batch distillation. Rather, it’s a function of the height at which various compounds condense on plates in the column.

The column still is the preferred equipment for making large amounts of rum in the most efficient and cost effective manner, continuously, day and night, without stopping.

Fresh rum, when first distilled, is clear and lacks the sophisticated flavors and golden amber hues of fine sipping rums. Most rum is aged before being bottled. Only a few rums are bottled without some amount of time spent in barrels. 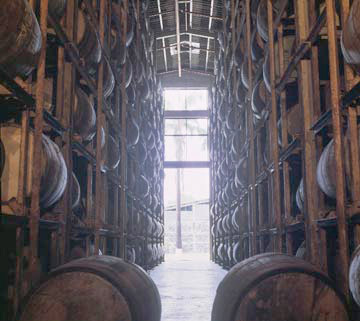 barrels of rum resting in the aging warehouse

Clear rums like Bacardi Silver and Don Q Cristal are aged at least one year to gain smoothness, then carbon filtered to remove the color gained from the barrels during the time spent aging.

Among premium rums on the market, aging in oak barrels is one key element to producing a superior product. The choice of used whiskey and bourbon barrels is common.

The alcohols in the rum interact with the wood to add subtle flavors, extract color and develop a smooth characteristic that is highly desirable to aged rums. For example, Appleton rums from Jamaica are aged in used Jack Daniels whiskey barrels from Tennessee.

Another method for maturing rums is the use of new oak barrels, often charred to an alligator-skin type texture, giving the rum a stronger interaction with the wood element in the maturing process. The size of the barrel makes a difference as well. Small barrels offer a higher wood to spirit ratio and tend to mature faster.

Some rums are aged in barrels previously used for sherry, cognac, port and other distillates, imparting their own unique characteristics. These variations can give a master blender a range of flavors with which to create unique blends.

Because methods of maturing can vary greatly, the simple age statement on a bottle of rum is not always an indication of the maturity of the spirit. Rums aged in small charred oak barrels, for example, can become quite mature at three to five years, while other methods take many more years to achieve similar wood-infused flavor profiles. 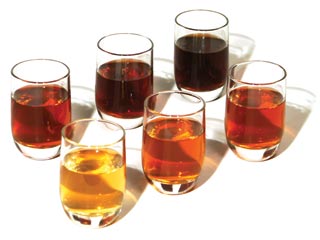 rums exhibit a multitude of variations in color, clarity and viscosity

Rums generally gain golden and amber hues as they mature. Some distillers use burnt sugar or caramel coloring to further enhance or balance the color for consistency. Many dark rums gain most of their rich color and often their full-bodied flavor from added caramel or molasses.

Over time, some water and alcohol evaporates from the aging barrel. This missing liquid has long been called the “angel’s share.” The remaining product in the aging barrel becomes more concentrated in flavor, color and viscosity.

When evaluating fine rums, judges will examine the color, clarity and viscosity of rums by holding a tasting glass up to a light source and swirling the product. The resulting drips of liquid on the glass, known as “legs” offer an indication as to the range of thin or thick characteristics. The rich color of the rum may indicate a level of maturity compared to other products. Exceptional clarity may indicate sophisticated filtering methods have been used.

The master blender of a fine spirit is often the “rock star” of the organization, possessing great talents and abilities necessary to produce the unique products of that brand. There are mysteries and closely guarded secrets involved in the aging and blending of fine spirits.

In many cases, aged rums are blended, then stored in barrels again to further mature and “marry the flavors” before bottling the final product.

One unique method of blending, known as the Solera Method, involves adding small amounts of newer rum to barrels of aged rum as the angel’s share is depleted. After many years, the resulting marriage of rums of many ages can create a complex blend of tones and flavors.

Some confusion may exist in relation to the actual age of solera style rums, since the blends are complex. Age statements on bottles might represent the oldest rum in the solera blend, but the amount of that portion might be quite small.

In the US, the age statement must refer to the youngest rum in the bottle. In practice, there is much variation among brands and expressions as to the veracity of age statements.

Many experts believe it’s best to regard age statements on labels with some degree of uncertainty. This is especially true if the rum is produced in a country that does not adhere to strict rules in regards to minimum age statements.

Learn about rum… Continue on to Types of Rum

Learn about rum… Continue on to Rum Cocktails