Recognizing 250 years of producing fine rhum on the island of Martinique, Rhum Saint James today announced they will release a commemorative limited edition bottling amidst a host of festivities scheduled for the 250th anniversary celebration on July 6 to 12, 2015. 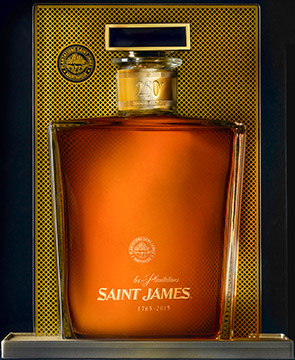 Saint James Rum is one of the oldest rum brands from Martinique, first producing rum on its plantations in 1765. From the outset the brand was a pioneer in its category, being the first rum to create vintage specific blends, and designing an innovative square bottle in order to maximize storage and minimize breakage on the long sea-voyages to its original export markets.

When the French King, Louis XIV, banned the sale of rum in France, an enterprising priest moved to Martinique and founded Plantations Saint James, where he produced and sold his rum to the settlers in New England. Rhum Saint James was consumed from Williamsburg to Boston, and became the most popular West Indian rum in the American colonies before the American Revolution.

The week of July 6 to 12, which traditionally marks the end of the sugar harvest, is set to be a key moment during the 250th anniversary celebrations in Martinique. The program includes tours of the distillery, masterclasses and tastings, as well as a live show culminating in the release of a commemorative limited edition 250th anniversary Carafe: an ultra-premium blend of six of the best Saint James vintages, presented in a luxurious glass flagon with embossed metal neck.

To pay full tribute to Saint James rich history, other festivities will be taking place across the world including an anniversary party in Paris, multi-media advertising campaigns and outstanding point-of-sale promotions.

Among rum enthusiasts the world over, this milestone anniversary will mark 2015 as the year of Saint James.

The brand is directed by La Martiniquaise, an independent French group founded in 1934. They are the second-largest spirits group in France and are featured in the world Top 10.