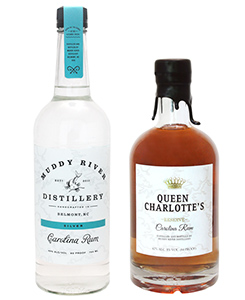 Combining premium grade molasses and sugar, along with a special strain of yeast, master distiller Robbie Delaney prefers a slow, small batch fermentation for up to two weeks before moving the mash to their custom built hybrid reflux column stills, Freedom and Democracy.

Co-founder Caroline Delaney oversees the business and has the final say on tasting the finished product.

Muddy River Carolina Silver Rum offers aromas of green banana and a whiff of white pepper before rich caramel, hard candy, marshmallow, taffy and a bit of almond. On the palate a very soft entry of gentle cane leads to very clean and subtle ripe banana, warming in the mid palate to reveal peppery notes on top of vegetal fresh cane, before a warm, lingering finish.

Another recent release is a coconut flavored rum.

Muddy River Distillery now has the capacity to deliver 300 bottles a day and distribution is growing quickly with online sales in most U.S. states.

This artisanal American hand crafted product represents the new rum revolution — a return to the days when small batch American rums made by mom and pop entrepreneurs were among the very best in the world.