The up and coming rum brand The Real McCoy recently announced a strategic partnership with Davos Brands, an importer and marketer of luxury wines and spirits. Davos seeks to develop The Real McCoy brand nationally, focusing on building sales, distribution and marketing of its premium portfolio. 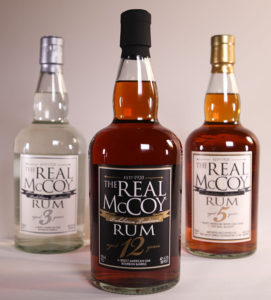 The Real McCoy Rum brand has recently partnered with Davos Brands to expand distribution of their acclaimed premium rum from Barbados, inspired by prohibition rum runner Bill McCoy (known as the Real McCoy).

The quickly growing Davos Brands, which launched in July 2014 with Ty Ku Sake and Zyr Russian Vodka, partners with up-and-coming best in class wine and spirit brands to develop and execute innovative sales and marketing strategies under the leadership of the Company’s Vice Chairman, Guillaume Cuvelier, founder and former CEO of Svedka Vodka.

Created by Bailey Pryor, an Emmy award winning filmmaker, The Real McCoy Rum was developed when Pryor was working on a documentary film based on famed Prohibition-era rum runner, Bill McCoy. The pioneer runner shipped the purest rum from Barbados to New York while remaining in international waters, three miles from the coast. McCoy’s high quality rum was never cut with impurities like impersonator runners, and became known around the world as “The Real McCoy.”

Intrigued and inspired by McCoy’s story, Pryor set out to bring the original fabled rum back to the market. After securing the trademark for The Real McCoy, Pryor partnered with famed Master Distiller, Richard Seale from the Foursquare distillery in Barbados. Evidence suggests this is the same family-run distillery used by McCoy himself back in 1920, thus launching The Real McCoy Rum in the US inspired by the original recipes of 3, 5, and 12 year aged rums.

“The McCoy story is an amazing component of American history, and we are proud to bring this product to the marketplace after so many years of research and development. We wanted to make sure that The Real McCoy rum was authentically made and lived up to McCoy’s standards as the ultimate super-premium rum, totally unadulterated and hand-crafted in the original Prohibition Tradition. We look forward to working with Davos Brands to expand our business and claim the top position in Super-Premium rum,” says Bailey Pryor.

“The Real McCoy is a captivating true story that Bailey’s five-Emmy award winning documentary presents masterfully [currently on PBS]. Creating a connection between a brand name that everyone is familiar with and a great piece of American history in the rum category is simply brilliant. We are incredibly excited and proud to represent The Real McCoy,” says Guillaume Cuvelier.

Since debuting at the Miami Rum Renaissance Festival in 2013, The Real McCoy Rum products have won numerous awards at global competitions, including the International Rum Expert Panel (RumXP) Gold and Best In Class awards.