The new artisan spirits division of Terlato Wines has announced the immediate availability of Don Pancho Origenes luxury rums from Panama across the United States, including the award-winning 8 year old, 15 year old and 30 year old expressions. 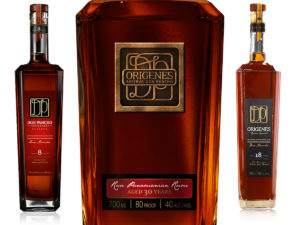 Don Pancho Fernandez’s brand of Origenes luxury rum from Panama is now being distributed across the Unites States by the artisan spirits division of Terlato Wines.

Don Pancho Origenes rums are produced in Panama by the legendary Cuban master rum blender Francisco “Don Pancho” Fernandez, who is globally recognized as one of the most experienced and respected rum blenders in the world. The brand marks Don Pancho’s first rum under his own name. The contents of each bottle reflect a lifetime of expertise and vision.

After learning the distilling craft from his father, Master Distiller Don Ramon Corrales Fernandez, Don Pancho was instrumental in modernizing Cuba’s rum industry in the 1970s.

After a global conglomerate acquired Cuba’s national brand, he relocated to Panama, where, in the 1990s, he discovered a neglected distillery in the Herrera region of Panama, which he built, with business partner Carlos Esquivel, into the Las Cabras Distillery.

At Las Cabras Don Pancho produced super-premium rums made with estate-grown, hand-harvested sugar cane in the Cuban tradition for many brands, while he watched and waited as the barrels of rum that he had been aging in Panama since the 1980s started showing some intriguing flavors and aromas. He soon realized that there was an opportunity to produce a blended aged rum under his own name — one that would be his own personal expression of aged rum.

Crafted in the classic “Cuban style,” Don Pancho Origenes rums are made with molasses from hand-harvested sugar cane and a proprietary yeast, are distilled in copper column stills and then aged in American Oak bourbon barrels of uniform size. Each barrel is hand selected by Don Pancho from his own private collection spanning decades. Renowned for his exacting standards, Don Pancho true-age-dates his rums by the age of the youngest rum in the blend, meaning the youngest rum in the 8-Year Old is 8 years old, and the same for the 18 and 30 year olds.

The 8-year is aromatic with hints of butterscotch and vanilla. Particularly smooth for its age, this rum makes for a perfect accent to cocktails or can be enjoyed neat or on the rocks. The suggested retail price is $40.

The 18-year is characterized by a beautiful, cherry wood color. Filled with delicate aromas of sweet tea, honey, moist dates and figs, this rum is smooth with a rewarding finish. The elegant mouth-feel fades gently to expose dried fruits and notes of bourbon due to many years aging in American oak bourbon barrels. Additionally, the 18-year recently won the Gold Medal at the Berlin Rum Festival, the only rum to earn a perfect 100 out of 100 points by noted rum expert Robert Burr in a blind tasting. The suggested retail price is $90.

The 30-year is the most exclusive and luxurious of the series, with only 2,000 bottles available worldwide and 600 in the United States. This expression has a complex nose with wood, bourbon, orange peel and apricots. Remarkably creamy and full-bodied, its rich flavors of fudge and caramel melt into the fruity nose with a complex, long finish. Best enjoyed on its own, neat. The suggested retail price is $425.

“With Don Pancho Origenes, Don Pancho created the kind of artisan rum that he had always envisioned making. We instantly knew that Terlato’s Artisan Spirits division was the perfect place to build our brand in the marketplace,” said Carlos Esquivel, executive director of Don Pancho Origenes. “After decades of experience producing some of the world’s finest rums, we are excited to work with the Terlato family as we release such a high quality series of rum expressions for the first time under Don Pancho’s name.”

Don Pancho Origenes is imported from Panama by the Artisan Spirits division of Terlato Wines, the leading marketer of luxury wines in the United States, with a 20 percent market share of wines $20 and up in the U.S. The exceptional quality of the Terlato portfolio is underscored by more 90+ scores from leading wine publications than any other wine company.