Aged a minimum of three years and chill filtered, the Select Aged 151 formula closely reflects the Admiralty’s regulations for official navy issue rum rations prior to 1970. 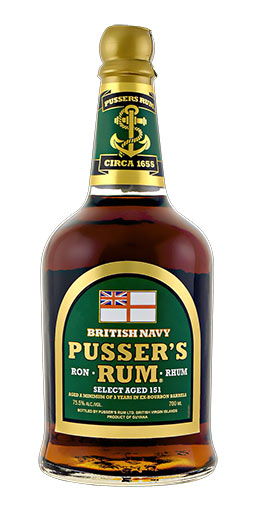 The rum faithfully evokes the spirit of camaraderie of bygone days when wooden ships sailed the seven seas in the heyday of the British Empire. At full strength, it brings both robust flavor and bold strength to cocktails, an indispensable component for many a tropical libation.

Re-creating the legendary naval blend of rich dark rums for the modern era was a distinct challenge for the founders of Pusser’s Rum, and we find their blends succeed at expressing critical aspects of rum’s storied history.

The Pusser’s name represents a mutated slang pronunciation of the world purser — the officer onboard principally responsible for handling money and valuable cargo onboard, including the issue of the daily rum ration.

A rich planter’s style dark rum, Naked In Jamaica is a private label spirit produced by famed flying ace, aerobatics champion and vintage airplane collector Kermit Weeks. The rum was created to his own specifications by Florida Caribbean Distillers in Winter Haven, Florida.

Naked In Jamaica dark rum is inspired by a song of the same name depicting a lifestyle of casual enjoyment in the tropical setting of Negril. Kermit sees clothing as a metaphor depicting the sublimation of one’s true self potential. He hopes the rum might inspire friends to strip the perceived inhibitions, false pretenses and limitations on finding their true self. A noble message in a bottle.

Aromas of rich molasses and brown butter dominate the nose, before a suggestion of vanilla, cinnamon bun, toasted coconut and dark fruit. On the palate, initial notes of sweet caramel, butterscotch and vanilla butter cream precede prune wine, chocolate brownie and treacle with just a hint of oak. The finish fades slowly with echoes of sweet coconut, then bitter chocolate over buttery croissant.

Naked In Jamaica dark rum strives to rekindle old-fashioned tropical essences used to make classic cocktails such as Planter’s Punch. It’s a good base ingredient for tropical punch recipes and makes a fine dark floater on top of tiki cocktails. The rum includes a warning to please drink responsibly and use sunscreen.

Naked In Jamaica took home a gold award in the Boutique Dark Rum category at the RumXP Tasting Competition at Rum Renaissance Festival, as well as a gold award from the Consumer Rum Jury.

The 750ml plastic bottle of Naked In Jamaica dark rum at 80 proof sells for about $19.

Kermit Weeks is an American aviation enthusiast, pilot, and aircraft collector. He has competed in aerobatics, designed aircraft, and is well known for promoting aviation and the restoration of vintage aircraft.

In 2012 Weeks was awarded the Lloyd P. Nolen Lifetime Achievement in Aviation Award by the Wings Over Houston Airshow. In 2010 he won the Freedom of Flight Award by Bob Hoover. In 2008 Weeks was inducted into the Florida Aviation Hall of Fame, and in 2006 was named a “Living Legend of Aviation.”