A signature bottle design is the distinguishing visual factor that first sets Deadhead Rum apart from the competition. Now, the spirit in the bottle is getting well-deserved attention since the Deadhead Rum brand transitioned to a new Mexican distillery for production of its 6 year old aged rum expression. 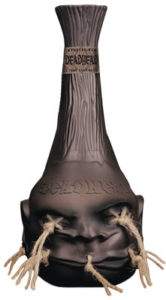 Iconic Brands’ Deadhead rum is a 6 year old aged rum produced at Bonampak distillery in the southwest region of Mexico.

According to Kim Brandi, founder and CEO of Iconic Brands, sales of Deadhead Rum have nearly doubled in the past three years to almost 20,000 cases.

The 65 year old Destilados Bonampak distillery is headed by a veteran rum producing Cuban family. The tropical climate, coastal breezes and ocean salinity help distinguish the DNA of this spirit. The process starts with sugarcane grown in Tapachula, Chiapas near the Guatemalan border and the Pacific Ocean. The distiller’s master blender earned his reputation with a large Cuban rum brand. The spirit rests in French Oak barrels for six years.

Aromas of vanilla, spice and big wood dominate the cane grass notes. On the palate, a dry bitter wood balances burnt sugar, vanilla wafer, pumpkin pie spice and a hint of citrus peel before notes of dried fruit appear during the long finish.

The iconic bottle is a depiction of a tsantsa, the shrunken head of an enemy. Traditionally used for trophy, ritual and trade purposes by tribes in the northwestern regions of the Amazon rain forest, the item is believed to harness the spirit of that enemy, compelling him to serve the shrinker and preventing the soul from avenging its death.

Iconic Brands seeks to distinguish their offerings with a “No Compromise” philosophy. The unique characteristics of this Mexican rum — and certainly the shrunken head vessel — are true to this goal.