The Daiquiri is among the simplest of drinks: Rum, Lime, and Sugar — shaken, not stirred. Among the most interesting variations on the simple theme of lime and rum, the Hemingway Daiquiri has endured as one of the most beloved.

Constantino Ribalaigua was the Cuban Champion of the Daiquiri. He refined and perfected many versions at La Floridita in Havana. In fact, the 1939 edition of his La Florida Cocktail Book included no less than five variations of the classic hand-shaken drink, not to mention the hand blended variations he made popular. 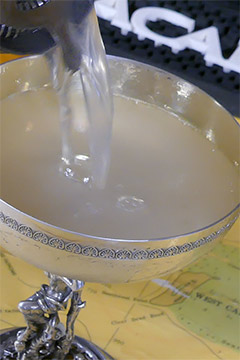 The world famous Hemingway Daiquiri was developed by Constantino Ribalaigua at his legendary bar, La Floridita in Havana, Cuba.

Elsewhere in Havana, in 1937, increasingly besieged and beleaguered by tourists at the ever popular Sloppy Joe’s, Ernest Hemingway stumbled a few blocks into Constantino’s bar and immediately fell in love with the intimate atmosphere of “La Cuna del Daiquiri” (the Cradle of the Daiquiri). La Floridita became his second home. You can still find a bronze statue of Hemingway sitting in his favorite spot.

method: combine ingredients with shaved ice and shake vigorously for at least one minute, until the can becomes extremely cold. Strain into cocktail glass.

Meant To Be Dry

The Hemingway Daiquiri is meant to be very dry on the palate — if that’s not to your liking, you could add up to a quarter ounce of simple syrup, to taste.

The less sugar in the drink the more that you can consume. There’s written accounts of Hemingway and a friend consuming 17 doubles each, in one marathon bad weather session.

A note on the Luxardo Maraschino: this dry liqueur is made from the sour fruit and the crushed pits of Marasca cherries. The red liquid in a jar of cocktail cherries is not to be used as a substitute.

Now, lets talk rum. Constantino would have most likely used Bacardi Superior, made in Cuba. Choose a dry rum that reflects the old Carta Blanca style. My preference is Caña Brava from the 86 Company.

For the popular Papa Doble variation, double all the ingredients, add an equal amount of ice, and frappe. Serve in a large chilled goblet with a straw. Sliced lime wheel and brandied cherry garnish optional, but totally awesome.

Here’s to less sugar in the glass for less pain in the ass. May you find your own “Islands In The Stream.”