From the fertile valley of Cartavio in northern Peru, a modern distillery produces pot still and column still rums from local sugar cane, aged in a variety of woods to create a number of award-winning expressions. This is Ron Cartavio aged rum. 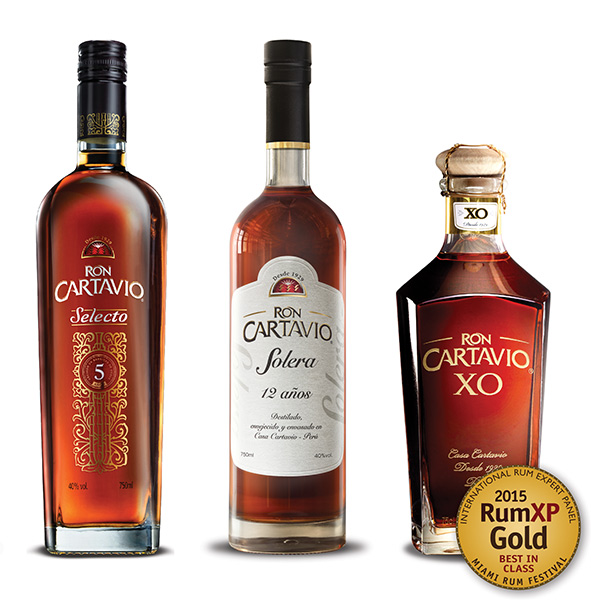 Ron Cartavio aged rums from Peru are imported in the USA by Jim Driscoll of Ekeko Wine and Spirits in Houston, Texas.

Although Peru is not generally known for producing some of the world’s best rums, U.S. importer Jim Driscoll of Ekeko Fine Wines and Spirits is hoping to change that perception and help Ron Cartavio aged rum earn the reputation he believes it deserves.

Ekeko has been importing pisco and wine from Peru for the past three years. On a recent trip to Lima, he and his wife Carole were amazed to discover the quality of this local Peruvian brand of rum.

“We first time we tasted Ron Cartavio aged rum, we knew we had to share this with our friends in the U.S.A.,” said Jim. He went to work right away promoting the Cartavio Selecto five year old aged rum and the Solera 12 year old. But Jim believed the one rum that would surely turn heads — that would truly amaze rum enthusiasts — was the 18 year old Ron Cartavio XO, a special aged blend created by Master Distiller Federico Schulz to celebrate the company’s 80th anniversary back in 2009.

One of Jim’s first major presentations was at the Miami Rum Festival and Trade Expo. Thousands of consumers and members of the trade tasted the rum that weekend in April, with excellent results.

“For a rum to win both the rum expert’s top award and the consumer jury’s top award was unprecedented,” said Jim. “These accolades and recognition — along with the great feedback we received from the people of Miami and the rum experts — reinforced our belief that Ron Cartavio XO is certainly one of the best rums in the world, even if few people knew about it yet. I could see I had a big job cut out for me.”

Parlaying on their recent success, Ekeko has begun opening up distribution for Ron Cartavio aged rum all over the United States, starting in Florida, Texas, California, New York and Illinois. They also added accessible silver and black expressions to their line of rums imported in the country.

Now, with more than 20 awards and greatly increased visibility, Ekeko will bring Ron Cartavio to the California Rum Festival in San Francisco in September. Festivities will continue with exotic cocktails and educated rum tastings at Longitude in Oakland, a bar that specializes in rum and cocktails.

To say that Jim Driscoll is optimistic about the success of Ron Cartavio aged rums is an understatement. “We expect to begin distributing Ron Cartavio in Georgia, the Carolinas and Washington state within the next few months.”

With undaunted entrepreneurial spirit, genuine passion and a love for these Peruvian discoveries, Ekeko is working hard to earn Ron Cartvio a coveted place on the menus of fine bars and restaurants, as well as the shelves of liquor stores across the country.

Additional information about Ekeko Wine and Spirits can be found at www.ekekowineandspirits.com