Ahoy the Duppy Share aged rum. The Westbourne Drinks Company of London has launched a premium expression of blended aged rums from Jamaica and Barbados — The Duppies Share — inspired by the legend of island duppies, the unseen gregarious forces of the Caribbean that conspire to steal a share of fine rum resting in barrels via evaporation. 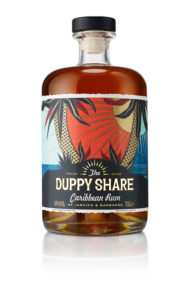 The Duppy Share features a delightful blend of aged rum from Jamaica and Barbados, imported into the UK by Westbourne Drinks Company.

In whiskey, the loss of spirit to evaporation is known as the angel’s share. Duppies, on the other hand are said to be nefarious and egregious spirits that cause trouble.

Designed as a premium rum to be sipped straight or enjoyed on the rocks, this spirit also works well in cocktails that are complimented by a rich, full bodied aged rum with bold notes of tropical fruit, baking spices and buttery caramel.

The producers suggest The Duppy Share is a great rum for creating tropical punch recipes to be enjoyed at social gatherings and rooftop parties during the summer months.

A well designed bottle complements the fine taste of The Duppy Share blend, with an evocative label design inspired by 1930s travel posters.

The Westbourne Drinks Company is a new business founded in London by Rum Adventurer George Frost and start-up guru Jessica Swinfen. Before launching The Duppy Share, Jessica was at Innocent Drinks for almost 10 years. One of the early members of the core team, she helped grow the company into the international brand it is today.

At 40% abv, The Duppy Share launched exclusively into Selfridges in 70cl bottles for £37.99.