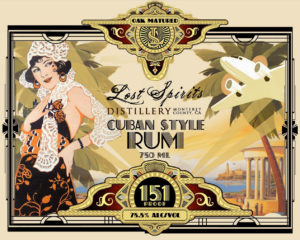 The distillation method isolates the desired cut with high rectification to separate the more robust flavors often found in the tails. Toasted American Oak barrels impart a mild enhancement without overwhelming the subtle flavor profile. The master distiller’s goal was to keep this 151 proof rum quite sippable and smooth in spite of the high alcohol content.

Initial aromas of pound cake, rich butter and hard candy lead to warm cinnamon, vanilla bean and dry dates with an earthy vegetal note before big cedar and white oak. On the palate, a small sip is big in the mouth but not hot, revealing butterscotch, fresh bread dough and vanilla wafer with molasses glaze. The complex flavor profile evolves into pepper and grassy cane before finishing with tobacco and a hint of cassia bark well into the pleasant dry finish.

Once again, Lost Spirits Distillery delivers a very interesting rum expression that challenges the norm, arousing the interest of rum enthusiasts and challenging the notion that old aged rums are always the most intriguing examples within the wide category of rum.

Lost Spirits Navy Style Rum and Polynesian Inspired Rum have recently been recognized with awards of outstanding achievement. At the 2014 RumXP International Tasting Competition held during the 2014 Miami Rum Renaissance Festival in Miami, the Navy Style Rum won a Best In Class Award and gained a lot of attention around the globe.

This 75.5 abv overproof spirit sells for $37 and is available in limited areas of distribution.